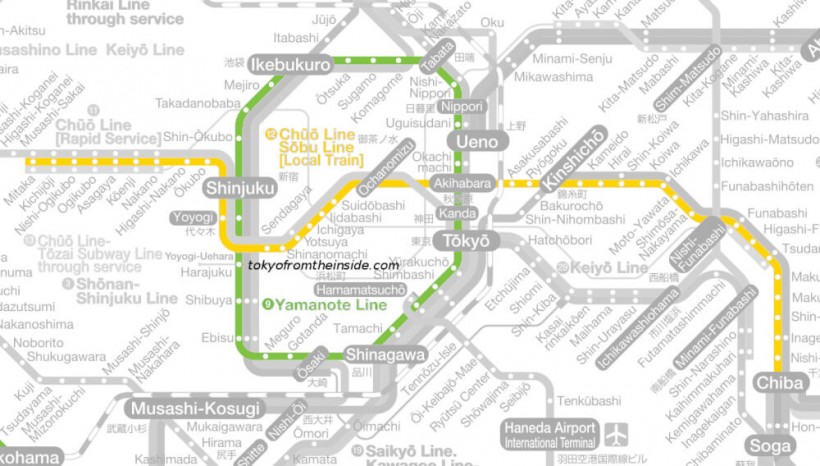 6. The Major Interchanges in Tokyo

If you have a particularly bad memory, the least you could try to remember are the big interchanges. If you have no interest in planning small details such as transport, at least try to stay near one of these big stations so you are assured of transport convenience. Also, if you ever get hopelessly loss, dropping off at one of these stations to do some re-routing is also strongly advised.

7. Help With Planning Your Route

Here, we will look at train passes for travel mainly within Tokyo. Hence, we will not be discussing about the JR Rail Passes.

The options are quite straightforward. You can get one day passes for specific companies (Tokyo Metro, Toei or JR) or a combination pass that covers 2 or 3 of these companies. For those who are planning to spend lots of time in Odaiba, there is also a 1-day pass for the Yurikamome Line.

IC cards are basically integrated circuit cards which allows one to enter gantries in train stations simply by tapping the card against a receiver. They work as prepaid cards (rechargeable) and must have sufficient stored value in order to be used. One of the clear advantages of using an IC card is that you don’t have to keep buying tickets every time you want to take a train.

There are a variety of such smart cards used in Japan but the two main ones used in Tokyo are Suica and PASMO. One common question first time visitors to Tokyo often ask is “which card should I get?”. The answer to that question is that it doesn’t really matter. Since 2013, the PASMO, Suica, Icoca, Toica, Kitaca, nimoca, Sugoca, Pitapa, Hayakaken and manaca cards have been made compatible with each other across Japan.

That’s all I can think of right now. If you have any further questions, feel free to drop a comment.